Recently I was approached by the people behind Maps Marker Pro to give a review of their plugin and share my thoughts on it. I was honoured and delighted to be approached for this, so after playing around with it over the weekend, here’s what my thoughts on the plugin is.

Maps Marker Pro is a system that allows you to build maps to embed into your WordPress blogs fairly easily. It’s a system designed for serious mapping, rather than lightweight solutions, as you can do so much in it.

Upon installation, you are sent to a landing page which allows you to begin building your map. This will allow you to create markers for your maps. Markers are one off items that simply mark points on said maps. You cannot drop a marker just anywhere, but instead an address must be set (although I couldn’t figure out if you could add a point anywhere). You do have control to move said map marker if the address doesn’t match up exactly.  A marker can be given a description, an icon, and a whole load of other features including a URL GPX Track (no idea what that is, but I’d guess you’d map a route rather than a point), the map zoom level, height, and width.

Once you’ve created the marker, it doesn’t take you back to the main screen, instead leaving you on the marker you have just created. This seemed odd, although I can understand why this was done, as generally WordPress leaves you on the same page post publishing. I’m not too fussed about that.

The real power in this plugin comes from layers. Layers are a system when you can add multiple markers to them. This is the most useful feature as although it isn’t unique to Maps Marker Pro, it’s implementation is beautiful. Rather than clutter the map, points are grouped together if they are close to one another on your chosen zoom level. It’s implementation is very, very slick.

When you have created a map, you can simply add it to any post or page via a shortcode, as well as add a recent marker widget. The map output is very neat, allowing you to switch between maps – so if you prefer Bing Maps to Google Maps, you can set this. Users can set this too, so they can change it on the fly. Beneath the map details on the points are listed. 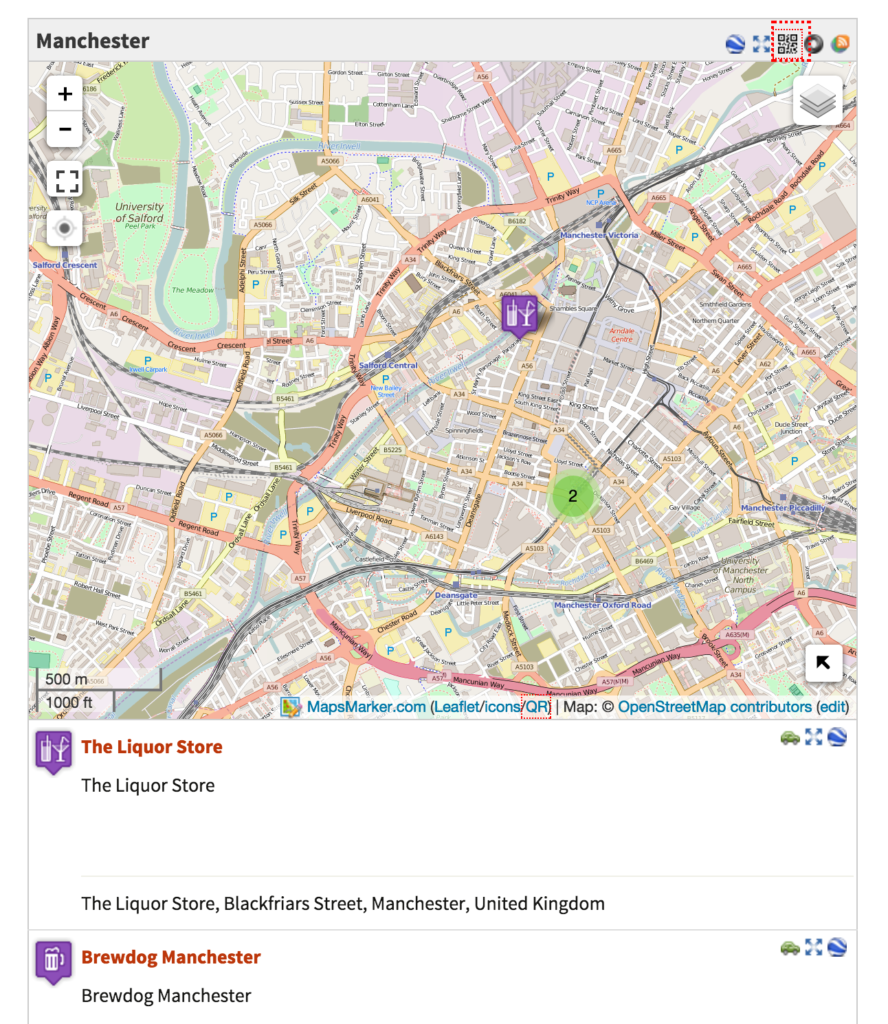 As I alluded to above,  there is a lot to do in this plugin. During the process of this review I didn’t check out the Augmented Reality features, which allow you to import custom maps – so if you want to go into detail on de_dust2 on Counter Strike, you can with this plugin. It looks good though.

It isn’t perfect though. As I said before, it isn’t the most intuitive layout, I’m not sure exactly why but it may be just me. Also, there was a WordPress notice that appeared after activation if debug mode was switched on (as it was on my test server).

In short, there is a lot to this plugin. It’s not the most intuitive yet I barely think I’ve scratched the surface in the purpose of this review. If you have a lot of very heavy Mapping Content (such as if you have multiple offices, or you plan routes), then this is a must have plugin. It’s public facing implementation is incredibly solid.