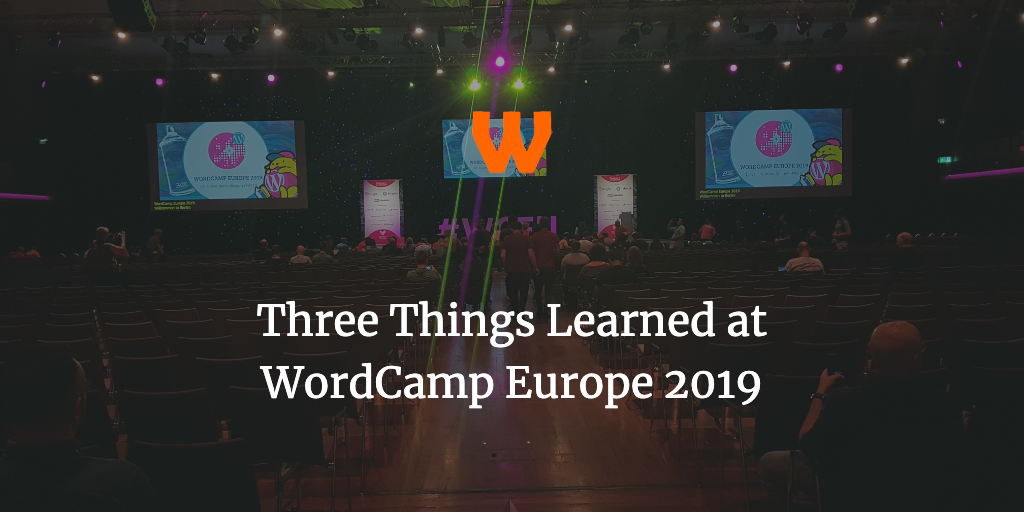 So a week or so ago I headed to WordCamp Europe in Berlin to find out what’s been going on in the community for the previous year. I’ll be honest – I’ve been a bit out of the community and events for the past 6 months as growing a business has been my main priority, so if nothing else seeing friends again was superb. But whilst spending time with good people was very much needed, it will not make for an interesting blog post. So here are the three things I learned at WordCamp Europe 2019.

With all due respect to the amazing speakers, for me the hallway track is my chosen place to hang out during the WordCamp. Speaking to people and making valuable connections is what I find. One such discussion was with Google representatives, who were sharing their latest WordPress plugin – Sitekit.

Sitekit is a WordPress plugin that connects all the most useful Google services: Analytics, Search Console, Adsense & Tag Manager within WordPress. The first two are the most useful for me as I Analytics and especially search console are useful tools, but they can be a bit overwhelming. These are now in the WordPress Dashboard. The beauty for search marketers is that with a bit of help from a WordPress Developer, you can generate custom dashboards using actions and hooks. This could be hugely useful going forward, so I’m excited to see how it developers going forward.

The second thing I found was that this was the biggest WordCamp ever. Berlin is incredibly accessible city, and beyond a few unfortunate issues for a few people, most people could attend. This was a great thing for the community, but WordPress is fast approaching the point that Brighton SEO is – where you can attend and see people attending but you’re in a position whereby even though you follow your friends on social media, you may not be able to see them at all.

There were people at WordCamp Europe that I just didn’t run into all weekend, largely because the conference is so big that you just cannot catch up with everybody. This sucks but alas I’d rather have a super accessible conference to attend with lots of people able to learn.

After a Few Tough Years, Much Needed Reflection Was Taken

The last few WordCamps have been a bit tense, at least from my experience. Gutenberg taking a priority over seemingly everything else has mean those not in the core Gutenberg teams have felt a bit alienated. Now that Gutenberg is out in the wild, it feels like WordPress is growing again but in other areas. Areas such as the Site Health Check in 5.2 are so cool and needed. This meant that this year’s WordCamp Europe seemed a lot more relaxed. Though that may have been the beer garden over from the venue.

Overall, a great WordCamp! I had so much fun, and whilst I’m slightly sad that WordCamp Europe won’t be in Manchester next year (we applied), I’m looking forward to going to Porto next year!