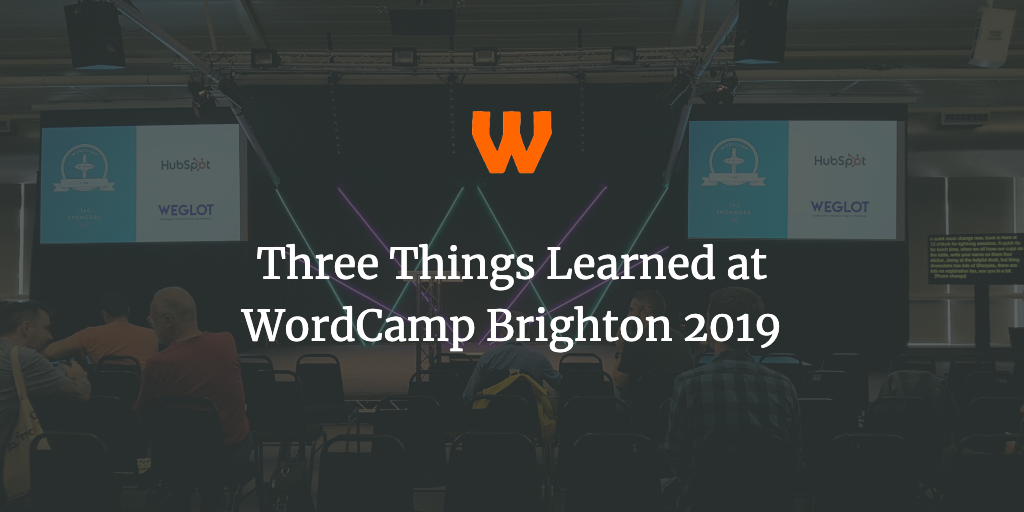 Recently I attended and spoke at WordCamp Brighton 2019. It was my first speaking gig of 2019 and I thoroughly enjoyed my trip to the south coast to spend time with the WordPress Community. Last year’s WordCamp Brighton I really enjoyed so it was a great to be able to speak at the event this year. You can see the notes from my talk here.

As well as a speaker, I also attended a bunch of talks. Here’s things I learned from the event.

Local WordCamps are Needing to Change (Probably for the better!)

When you run a WordCamp, you have a stupid level of control. Sure there’s a formula, but you can shape a WordCamp in your image. Brighton has a definitive style – it’s very eco-friendly, and vegan. Hell there was a reason the Manchester after party was usually in a place showing the evening kick off in the Premier League 😉. And this year was no different.

Brighton took the decision to reduce the number of talks. And it was good. All in all having less talks spread out over 2 days meant that the hallway track wasn’t really a thing, because the breaks were enough to meet and catchup and talk.

This was kind of emphasised in one of the talks that was a panel dedicated to WordCamps. In amongst the sharing of thoughts on WordCamps, one thing stood out – that local WordCamps need to possibly change.

Whilst I don’t think I suffer from imposter syndrome too much, I definitely at time has a lot of self doubt on things (probably explains why it took me so long to go freelance). So to hear somebody else talk about something that I have tendencies for and possible ways to stop it was reassuring and rather needed.

My only thing with it was I wish it wasn’t last thing in the conference! I could have a better sleep on the Friday night!

A Different Talk from me…

Yes, I didn’t get too good a sleep on the Friday night, as my talk was a new talk and also departing slightly from my usual talks as it was more about dealing with people rather than dealing with code. So, I’m not going to lie, I was nervous.

Thankfully though everybody in the audience seemed to enjoy it, and I’ve been asked to perform it elsewhere, which is a great honour. So I’m going to be looking out to hopefully do it again somewhere. You can see the slides at this link (I’ve decided to split out my Dwi’n Rhys talks to that site).

Overall, Brighton was great fun as always and it was great to connect with the community, I definitely recommend if you can you should attend next year!