What Is The Most Accurate Search Engine Rank Checker?

In the past few weeks I’ve been testing a bunch of software packages for rank checking. It’s a cornerstone of an SEO’s arsenal of tools, and there’s a number of them out there.

But which is the best? After all, whilst it isn’t the most important metric for an SEO campaign, it is one of the most important and one that many SEO workers are judged on. Knowing the ranking of sites as well can help you spot new opportunities. I decided to test a few of the most popular – SEOBook’s Rank Checker, Link Assistant’s Rank Tracker, SEOMoz’s Rank Checking Tool & Advanced Web Ranking.

To test this – I tested over 300 keywords over a number of sites, comparing with their original manual ranking.

One thing I noticed throughout the report was the innacuracies of 1 or 2 on page 1 rankings. After doing a bit of research, I found out why. Imagine if I was the SEO for allwwewrestlers.com & wanted to check my rankings for “Hacksaw Jim Duggan”. 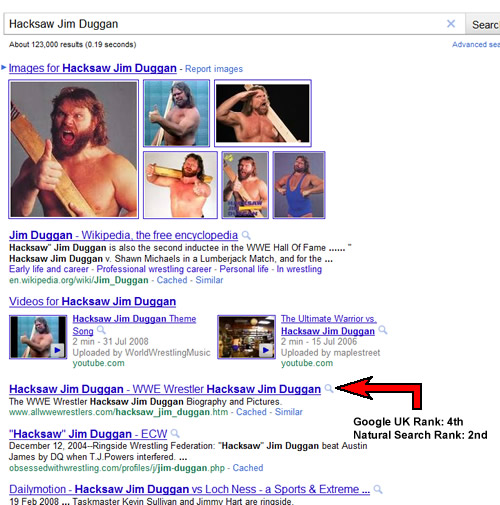 As you can see, although we have the Image & Videos in the search results, the natural search rankings are showing up as second. These image/videos/places/shopping etc. result change all the time, so I can imagine that SEOMoz probably spends time & the resources including them in the rank checking algorithm, whilst Link Assistant’s Rank Tracker doesn’t. Please don’t hold me to this, as I don’t know.

In paying for SEOMoz just for the Rank Checker it’s like paying for a Manchester United season ticket just for the Wolverhampton Wanderers game. In the $99.95/month you get a lot of other tools to help you market your site. If you’re serious on SEO, then it’s the best package.

For everybody else, I did prefer Rank Tracker. It was quick and easy to check rankings, accurate and reasonably priced. It struggles when you run a lot of checks, and useless if you want to compare rankings accross multiple domains. Update: Rank Tracker has seemingly been having problems recently. I’ve had misreported rankings. As a result, I can’t really recommend Rank Tracker at the moment.

Advanced Web Ranking is great as a comparison tool. By default, it only handles the top 50 results but this can be increased, but if you want to compare keyword rankings over times across multiple domains, it’s probably the best. However, it is very slow.

Where To Get Each Rank Checking Tool

For each of the products on here, you can get them from the following places.

Comments will be permantly open on this entry, please leave your thoughts on any of these tools below.

Have Your Own Rank Checking Tool?

If you have your own rank checking tool, please contact me. I’d happily run a few tests & add it to the list above!