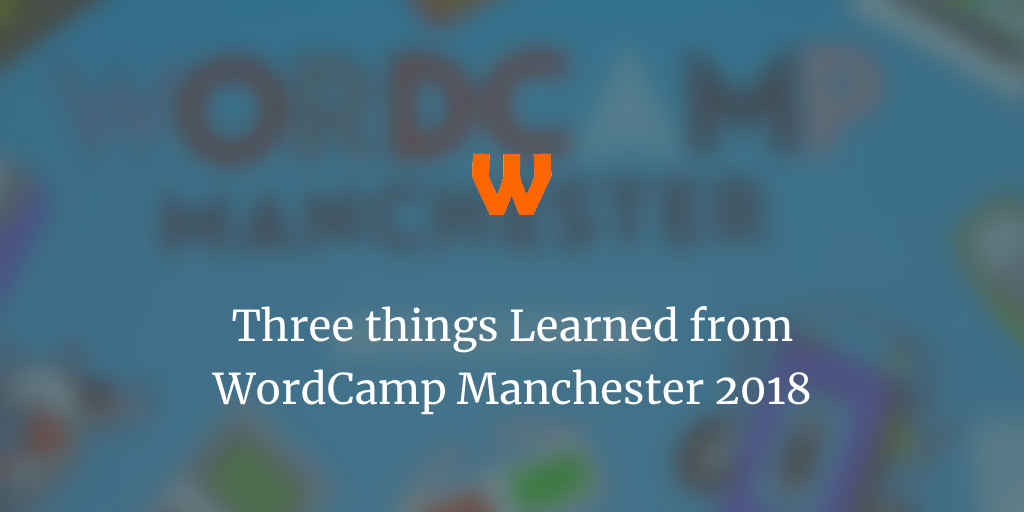 So a few weeks ago I attended WordCamp Manchester in the MMU Business School. I was fortunate I was asked to speak (you can read my talk notes here), and overall it was a great conference. I had a blast at the event, reconnecting with the WordPress community once again after seemingly an age. It was also my first WordCamp since officially going freelance, so it was great to pick the brains of fellow freelancers who have had their skin in the game a lot longer than I have. That was fun. Overall though I did attend a fair few talks (that weren’t my own) and I learned a fair bit from various people. Here’s my three takeaways from WordCamp Manchester 2018.

So Gutenberg is probably happening within the next two months. Depending on who you speak to it’s either going to be amazing or WordPress’ version of Brexit. I’m not sure yet what camp I’m in (I know which one I’m tending to), but it is going to be a big change, and smaller agencies and freelancers are more than likely not ready.

What was cool was hearing how other agencies have prepared, and Mark Wilkinson of Highrise Digital’s talk of “Transitioning to a block based editor in a pre-Gutenberg world” was excellent. Mark covered how they are building complex layouts without the need for Gutenberg, and what to do after Gutenberg hits. Excellent and well worth watching (his talk is already live on the above link).

Re-evaluating my Life Choices Thanks to Tim Nash

So one of the most funny yet sobering talks was Tim Nash’s talk “Come to the Dark Side, We Have Cookies”. In it he covered some of the hacking successes he’s been aware of in his time as being a security expert. Equally parts funny and terrifying, I’m now looking to become a monk (not really, please still hire me).

It’s well worth checking out when live on WordCamp.tv

WordCamp Manchester 2018 seemed a lot smaller than previous years. It has been a feeling that many UK based WordCamps have reached a peak and cannot really grow in their current guise. This has lead to stagnation at times, at some WordCamps.

I feel like Manchester had one of the best years it had (and not because I spoke), because it has felt smaller. It was smaller, more intimate, and more meaningful connections will be made.

I feel like right now, WordCamps – certainly in the UK – will be changing over the next few years to make them stand out. Not instead be the 14 speakers, swag, lunch & after party cookie cutter WordCamps, but something else. What that is I am not sure.

Overall, I had a great time though, and it’s well worth checking out next year!